A front page and a half lead Feature Article at: http://www.emissourian.com/features_people/feature_stories/addressing-the-ugly-past-in-hope-for-the-future-franklin/article_77f7176e-d4a0-11e9-be68-9bd5027c8eb8.html

Addressing the Ugly Past In Hope for the Future — Franklin County Community Remembrance Coalition Is Working to Erect a Marker, Memorial to 1897 Lynching Victim

Article, Photos and Captions from The Missourian Wednesday, September 11, 2019 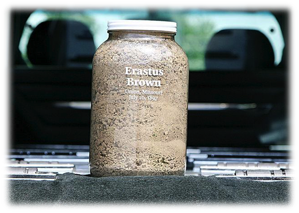 In July, more than 122 years after Erastus Brown, an African-American living in St. Clair, was lynched in Union by a mob while he was being held in the county jail on charges of attacking a white woman, the Franklin County Community Remembrance Coalition held a memorial for him at East Central College.

You probably have never heard of Erastus Brown, and after you know his story you may wonder why it matters to people more than a century later. After all, it happened so long ago and all of the people involved have long since died.

Lloyd Klinedinst, his wife Bobbie Bollmann, Carl and Pat Bowers and other members of the Coalition that was formed last year see this as the only way to move forward in healing the racial divide plaguing the country today.

“Why bring up wounds from the past? Because it’s never been addressed,” said Patricia Bowers. “If you go to Germany, you see where people have symbols recognizing people who were caught up in the Holocaust. They address it and accept it. But here with lynchings and slavery, people want to just ignore it and say it’s in the past.

“But until we bring it to the forefront and accept the history, accept what happened, what we did, it’s never going to go away,” she said, noting that both black and white are guilty of ignoring the issue.

The Franklin County Coalition came together last year after Klinedinst read an April 2018 article in the New York Times about the opening of the National Memorial for Peace and Justice in Montgomery, Ala., by the Equal Justice Initiative or EJI. The next week, he emailed EJI wanting to get involved.

Erastus Brown was lynched July 10, 1897, on the banks of the Bourbeuse River. He isn’t the only victim of a racial terror lynching in Franklin County, but his lynching occurred during the time frame that the EJI is focusing on — 1877-1950.

The year 1877 was chosen because it represents the end of Reconstruction, Carl Bowers explained.

According to its website, https://museumandmemorial.eji.org, “The National Memorial for Peace and Justice . . . is the nation’s first memorial dedicated to the legacy of enslaved black people, people terrorized by lynching, African-Americans humiliated by racial segregation and Jim Crow, and people of color burdened with contemporary presumptions of guilt and police violence.”

The memorial includes more than 800 corten steel monuments, one for each county in the United States where a racial terror lynching took place, with the names of the lynching victims engraved on the columns.

In July, the Coalition held a series of events to educate the public about Brown’s lynching. The first was the Creative Dream Exhibit at the Washington Public Library from July 2 to 28. Plans are to install the exhibit in other local libraries or public spaces.

Then on the 122nd anniversary of Brown’s lynching, July 10, the Coalition held a Soil Collection Ceremony on the banks of the Bourbeuse River to collect soil to be included in EJI’s Legacy Museum in Montgomery, Ala.

And on Sunday, July 14, the Coalition held a memorial celebration, beginning at the Historic Franklin County Courthouse, where a procession of cars (similar to a funeral procession) that included a hearse carrying the soil sample, made its way to the Regional Training Center on the campus of East Central College.

Currently the Coalition is working to erect a historical marker noting the details of Brown’s lynching. Plans are to begin clearing an area on the ECC campus in October for a Memorial Garden, that would feature native plants.

The marker will be provided by EJI, and the Coalition will be responsible for installing and maintaining it. Members hope to have the marker in place next year.

After that is achieved, the Coalition then can work toward having a replica monument of the steel beam displayed in the National Memorial for Peace and Justice installed in the same Memorial Garden on the ECC campus.

“That’s the mechanics of it, but I keep saying this is only partially about Erastus Brown,” said Carl Bowers. “It’s really about how we coexist in this country and in Franklin County.

“It’s the same thing as the Holocaust Museum. Why do we remember the Holocaust? It’s an ugly time. We remember it so it won’t happen again, so we recognize what mankind is capable of and we remain vigilant to make sure we work for equality, civil rights, all those things, because those are the things that our country is founded upon.”

“It’s to recognize our history, not to deny that part of it,” he said. “It’s reframing history so that we identify who we are, good and bad . . . That’s why the real heart of this is the human community building. That’s why the coalition does not end after these three physical things happen. It’s a community networking constantly in process. That’s in a sense what triggered me and the members, that we need to recognize this, to accept this and build it in our awareness.”

People who think “things are better today,” may be right, said Pat Bowers, but that doesn’t mean the history shouldn’t be confronted. If the history is not remembered, it’s easy to pretend it wasn’t as bad as it was.

Using old newspaper articles and historical records, including one written by Larry Wood (“Yanked Into Eternity: Lynchings and Hangings in Missouri”), Klinedinst pieced together a brief time line of events that led to Brown’s lynching. He shared the story at the memorial ceremony held July 14 at ECC.

Brown left his home near St. Clair on July 2 to get medicine for his sick child (who later died). He was walking to Gray Summit, where he had grown up.

Annie Fehrring was walking home along a road near Villa Ridge after going to the store, when someone attacked her, hitting her on the head with a rock.

After Fehrring was rescued, rumors spread that she had been sexually assaulted, although doctors only reported a head wound. She later identified Brown as her attacker. He had been seen hanging around the area in recent days.

Brown was captured Saturday, July 3, and taken to Fehrring to identify. He was taken to the county jail and appeared in court Tuesday, July 6, where he denied any plea deal and was sent back to jail to await a grand jury decision.

Brown is said to have admitted attacking Fehrring, but said his only motive was robbery to be able to pay for medicine for his sick child.

A mob showed up at the jail in the early morning hours of July 10, broke into the jail, bound Brown’s arms and legs and placed a rope around his neck. They loaded him a wagon and headed for the Bourbeuse River, stopping at a willow tree about an eighth of a mile past the bridge, where they hanged him.

His body was claimed on July 11 by his wife’s brother and uncle and buried in a negro cemetery between Gray Summit and Villa Ridge.

Want to Start a Conversation

At the memorial celebration for Brown held at ECC, there were a series of books and literature from EJI on slavery, lynchings and mass incarceration that members of the Coalition would like to use to start a conversation among people in the area. They believe people here are interested in learning more based on feedback they’ve received from other events.

Last April a group of some 20 students from ECC made a trip to Montgomery, Ala., to tour the Legacy Museum and the National Memorial for Peace and Justice.

And after a play telling the story of “German Abolitionists in Missouri” was staged at Washington High School in July, many of the 150 or so patrons in attendance commented that they had no idea of that history.

“We are beginning to figure out how to keep this conversation going,” said Bollmann, “Not just sticking these things over there and saying, ‘Now we are done.’ We have a commitment to continue the conversation.

“One of our ideas is to try to generate conversations, at the library or someplace where people are comfortable coming to,” she said. “We don’t all have to be kumbaya politically, but let’s use these books as a basis.”

The Coalition includes 10 members, six of whom (including Klinedinst, Bollmann and the Bowers) also belong to Neighbors United Undoing Racism (NUUR), a nonprofit group started in 1997 with the mission to undo racisim by providing opportunities for all people to be treated with dignity and respect through education and communication.

NUUR is not part of a national organization, although members have learned of similar groups working around the country. Klinedinst noted he has been contaced by people in Jackson County in the Kansas City area about creating a Missouri Legacy Museum, modeled after the one by EJI in Alabama.

It would have its own soil collection to represent the lynchings that occurred in Missouri, which has 32 counties where 60 such lynchings occurred, said Klinedinst.

At the Brown Memorial in July, a jar of soil from the Bourbeuse River was filled for the proposed Missouri Legacy Museum.

Last month, Ruth Ann Smith of NUUR delivered that jar to the Black Archives of Mid-America in Kansas City. It is the first jar of soil to be accepted for the proposed Missouri Legacy Museum.

To read more about the work of the Coalition and watch for upcoming events, go to http://fccrp.klinedinst.com/. 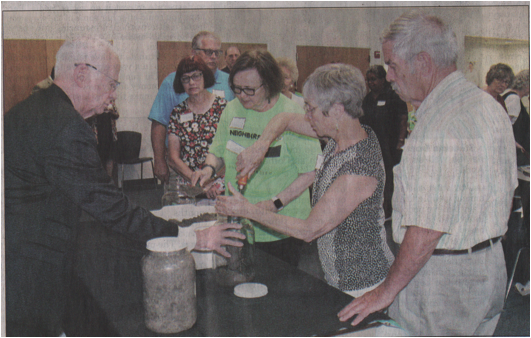 People attending the Erastus Brown Memorial Service, Sunday, July 14, at East Central College lined up to fill jars with soil collected near the Bourbeuse River where he was lynched July 10, 1897. The service was sponsored by Neighbors United-Undoing Racism and hosted by the Franklin County Community Remembrance Coalition. From left are Lloyd Klinedinst, Coalition member; Bill and Robin Stewart; Kathy Hurlbert; Kayla Vaughan; and Terrance Wilson. 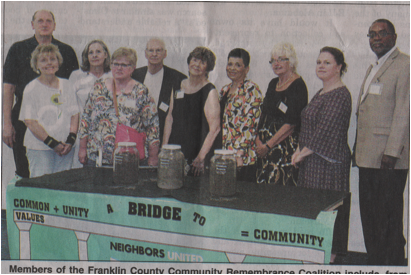 At the National Memorial for Peace and Justice in Montgomery, Ala., 800 corten steel beams, one from each county in America, hang with the names of African-American lynching victims who died between 1877 and 1950 etched in them. The Coalition plans to have a replica beam installed in Franklin County to honor Erastus Brown. 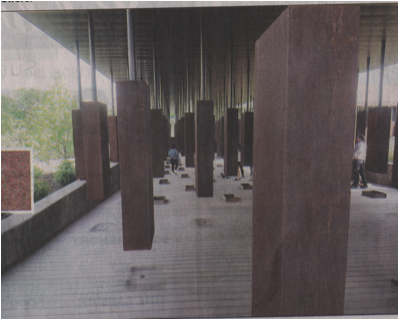 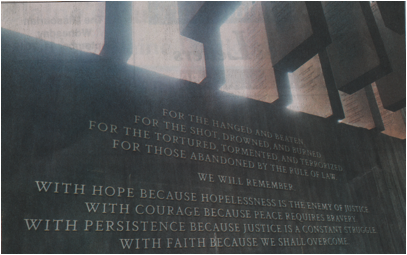 National Memorial for Peace and Justice in Montgomery, Ala. Honors racial terror lynching victims who were killed between 1877 (the end of Reconstruction) and 1950. 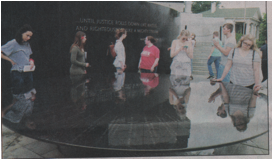 Students from East Central College toured the memorial, as well as the Legacy Museum and other sites, in April.